[For the first half of this article and a video presentation on soil restoration by Michael Meléndrez, please see:  Loving the Soil – Part 1: The Importance of Humus (Carbon Matrix).]

It seems that there is a misconception even among the land-restoration enthusiasts that simply adding organic matter and water to the soil is going to provide what it needs for healing. I believed this too for the most part. On my property, I created numerous swales and water catchment areas to hold water from running off the land, and I filled them with whatever organic matter I could find: cardboard, branches, old straw bales, manure, old produce, old lumber, woodchips, etc. My intention is to create water and nutrient sponges to encourage the development of a healthy ecosystem from the depleted, eroded, desertified land that I have lived on since 2016. I planted a few trees in and around these water catchments but was going to delay on planting more trees until there was enough moisture and organic matter in surrounding soils to support them. The many swales and catchment ponds caught the rainwater beautifully. And the organic matter soaked up the water and stayed moist for many months.

But as I recently learned from Michael Meléndrez, soil extraordinaire (see Loving the Soil – Part 1: The Importance of Humus (Carbon Matrix), the key to healthy soil is humus. And you don’t make humus just by adding lots of organic matter and water. My plan of just adding water and organic matter was faulty in two ways. First, it is essential that soils and plants can breathe. After the monsoons had filled the catchment pools and swales, the organic matter became nice and saturated, but the water didn’t soak into the soil very well. After a few weeks, the standing water and organic matter started to bubble and stink. I recalled another soil expert, Elaine Ingham, saying that anaerobic conditions (where soil is depleted of oxygen) were going to start producing anaerobic bacterial byproducts that were toxic to the soil and any plants or trees trying to live there. My bubbling ponds and the correlating stink were telling me that this was occurring.

I asked Michael about this and he confirmed the issue. Apparently, my soil has a high enough clay content that the water was being held too long, and in combination with my enthusiastic filling of organic matter and perhaps the wrong kind of organic matter, it was indeed creating an anaerobic situation that was putrefying and producing a variety of phytotoxic metabolites. These compounds like alcohols, methane, and hydrogen sulfide are all highly toxic to plant and soil organisms and some of which are released into the air (CO2 and methane) adding to detrimental green-house gasses. This is not what I wanted.

As pond builders know, you can create a kind of a seal on the bottom of a pond by trapping green organic matter on the bottom to form a putrefied mat that makes it even harder for water to penetrate. In the case of a real pond, this can be a benefit, but when you are intending to increase the infiltration of water into soil, like I am, it is a real problem. Fortunately, the water in my “ponds” will eventually soak in and/or evaporate in the dry seasons. And when the water levels drop, Michael suggested that I make use of his product called TerraPro to help open the soil back up (by the formation of good soil structure where air can penetrate) and introduce beneficial organisms to help break down the excess organic matter and toxins. Additionally, he reminded me that planting around water catchments is essential in the soil and ecosystem restoration process. Those roots are needed to break up soils, feed the mycorrhiza fungi, and transfer oxygen and nutrients to other biota living in and upon the soil. This was the second area I was lacking in my soil restoration attempts. Even if trees couldn’t be supported yet by current soil conditions, certainly certain grasses and native perennials could offer their roots to help prepare the soil. 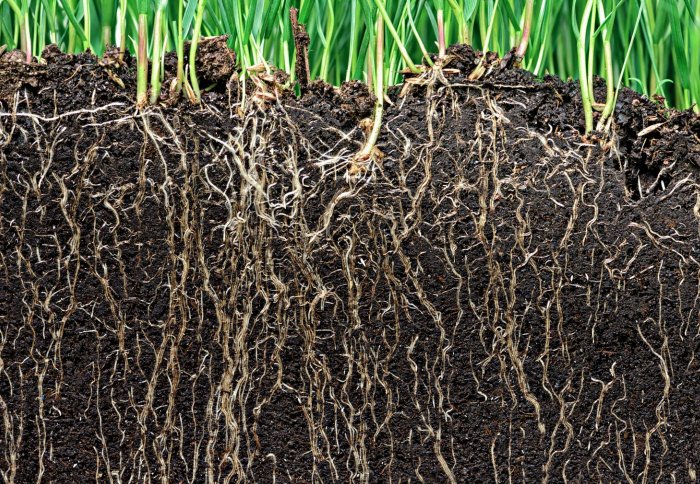 Michael went deeper into his explanation of carbon and the use of organic matter. He explained that while we do want to increase the carbon content in soils, we don’t want just any carbon. The highly beneficial electrically activated carbon found in humus (and in his product TerraPro) is not the same as carbon found in organic matter. Adding lots of organic matter without this active carbon matrix component can actually be detrimental to soils, reducing the abundance and diversity of life-enhancing biota in the soil. Sure, we may temporarily increase the amount of nutrient in the soil, but it will either be lost to the atmosphere as compounds that aggravate greenhouse gas issues, or consumed by organisms that actually hinder ideal, long-term soil conditions. It is a bit like feeding sweets to a person. There may be a temporary boost in energy, but there will be an overall decline in the health of the whole system, until the body regains a more stable balance.

The carbon found in active healthy humus is extremely stable and is called recalcitrant carbon. It has a measurable decay rate that indicates that humus remains in soils for about 3000 years. And here is the kicker: it does not form as the end result of decomposition of organic matter! It is formed by taking carbon out of the air. This form of carbon is thus a wonderful carbon sink and quite beneficial in the carbon-sequestering campaign to reduce green-house gasses on our planet, as well as vital to the remediation and health of soils.

The carbon found in organic matter, on the other hand, is what is called labile carbon. It decays quickly, and when it does, it loses the precious carbon back into the atmosphere as CO2, adding to greenhouse gasses and global warming. This issue is compounded when organic matter encounters anaerobic (without oxygen) conditions, like my swales that drained too slowly. This is when the phytotoxic metabolites and carbon and methane gasses are formed. But even compost piles can lose a significant amount of carbon as CO2 because they are usually fortified with animal manures which are high in nitrogen and can become so hot that they burn off significant amounts of carbon as well as other nutrients.

One can minimize the loss of carbon as gas and make great use of organic matter by slowing down the decomposition process and making sure it is proceeds aerobically (with oxygen). This can be accomplished by keeping the basic food for soils—organic matter—on the surface as a mulch. As a surface mulch, organic matter offers tremendous positive benefits to the soil: it feeds and houses beneficial organisms, reduces erosion, stabilizes temperatures, captures and holds moisture, and enhances soil structure—all of which support the creation and maintenance of soil humus.

The ideal depth of mulch will depend on the type of mulch, how it is treated, how often it gets saturated and how long it remains saturated. You will have to use common sense with this. Inside a swale or water catchment, you will have to pay attention to drainage. With good drainage, you can add a good 6 inches of mulch. With very poor drainage, you might want to take other actions, which I will mention below.

From my own experience, I would not recommend using only straw, paper, or even leaves as the source of organic matter in swales, because they compact down, block air flow, and in swales with questionable drainage, straw, in particular, will putrefy readily. Rather, I would suggest mixing in wood products like branches, old lumber (untreated), wood chips with the cardboard, straw and leaves to assist air to penetrate and keep the decay aerobic and slow—just like in nature.

On planting beds, like in my veggie garden, straw is a great mulch because it stays on top of the soil and can be moved aside very easily when planting. This is important because you don’t want to mix mulches into the soil—it locks up nitrogen sources that the plants need.

Straw that is soaked while still in a flake (or “biscuit” as they are called in Australia) will limit air flow, so if a whole flake is used, a thin (1-2″) application may be preferred. Soaked straw that is loosened first (not in a compact flake) can be applied more thickly, perhaps up to 6 inches or more depending on how often it is watered and how loose it is. Straw mulch that is dry or applied on drier areas can be even thicker. Unopened straw bales sitting on the ground will slowly decay in a healthy, aerobic way as long as the balance of air and moisture is maintained. But if a location causes bales or straw mulch to sit in pools of water for extended periods of time, then straw may not be the best choice, because of its tendency to putrefy.

Wood chips that are small and interspersed with sawdust may be best kept to 2-3 inches. Larger wood chips or chips that contain air pockets will better allow for air penetration and can be used more deeply, like 6 inches.

It is helpful to consider rainfall characteristics as well. In arid regions, in areas beyond the influence of water catchments, it would be best to limit mulch to 2″ so rain doesn’t get caught up in thick mulches at the expense of plant roots below. As you move closer to catchment areas, successively deeper mulch can be applied because more of the source of moisture will come laterally from the catchment rather than directly from falling rain.

It is worth experimenting—to seek the ideal balance of air and moisture to best feed the beneficial soil organisms that make soft, sweet smelling soil rather than those that make stinky, slimy by-products.

Keep in mind with mulches that they will break down as they feed microbes and become soil, so they will need to be replenished as needed. Ideally, planted trees, shrubs and grasses will take over to supply the needed mulch, but until that point it is our role as nature’s assistants to ensure the soil has what it needs. And in the case of gardens, we will always need to have a source of food for the soil, whether it be organic matter brought in or green manures that are grown on site.

To feed deeper layers of the soil, Michael explained that the best nutrient sources are plant roots, because they supply essential oxygen and nutrients in a balanced, steady, and interactive process to ensure long-term health of the ecosystem. Simply put, Michael says, “You can’t fix soils without roots.”

After hearing Michael’s detailed explanations, I will summarize by suggesting the following for arid regions like north-east Arizona (non-arid areas will have different protocols):