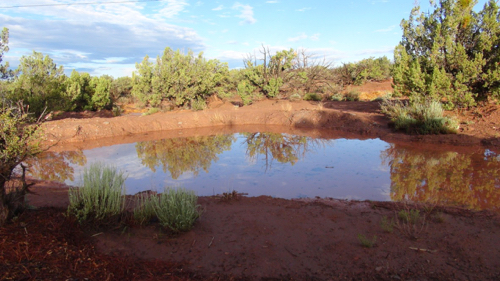 The monsoon season is tapering down to a close. It has been a good one for some folks around here, but many of the good downpours seemed to have missed my little corner of the high desert. There were, however, a few good rains in July that did allow my recent earthworks of swales (trenches on contour) and silt traps (water catchments that fill up with silt) a chance to show their worth. Notice I didn’t say ponds. Ponds are generally not practical in the desert, since they are such a big source of evaporation (loss) of precious water to the hot, dry air. There are ways, however, to get ponds to be more compatible with arid environments; for example, one can shade a pond with trees, man made structures, or aquatic plants to minimize evaporation from both the sun and wind. And a small wind protected and shaded pond can provide much needed drinking water for animals of all kinds. I have a small drinking basin set on my property for wildlife that is connected to my roof system, so it fills up every time there is even the slightest rain. Maybe some day I will expand this into a larger system, but I have to be careful not to create something that the wildlife learn to depend on, only to have it dry up in a lean rain year.

So at this stage of things, I am focusing on the simplest method of capturing water in a desert–encouraging it to slow, sink and spread into the soil. But sometimes things happen that we don’t expect.

For a short time after these rains, I did have pools of precious water dotted around the property. But what surprised and delighted me was that the night after the first major storm, I heard the sounds of frogs! What? This is a desert! Where did frogs come from?

Well, it turns out that God had many examples of Her cleverness to show me this season. Apparently there are a few species of native desert frogs that can survive long periods of dry conditions by burying themselves and hibernating in the mud, even as the surface soil completely dries up. And when there is enough rain to re-saturate the soil and create pools of water, they come out and start croaking in order to attract their mates. They then mate and lay eggs in one of these ephemeral ponds with the chance that the water will stay long enough for their eggs to hatch into polliwogs and then into mature enough frogs that can again bury themselves into the soil for the next suitable rain events. What a system!

So as all the other swales and silt traps slowly seeped into the thirsty earth, one pond remained. I knew that this particular site had lots of sticky clay to help seal it up, and it had captured some water last year too, even before I had work done to its berm this year. And sure enough this is where I first saw the polliwogs.  What a delight!

But I wondered, what could they possibly have to eat? I researched and found that they generally eat algae, but there was no algae in the pond. There was nothing—just mud. So I had the thought to throw some things into the pond to possibly provide a source of food or at least habitat for the new residents. I had a few particularly healthy weeds in my Watson Wick that I let grow huge because I didn’t know what they were, and they seemed like a cross between Alfalfa (lucern) and Amaranth—both nutritional plants—so I let them grow to see if the native jackrabbits and bunnies would like trimmings for a treat. Sure enough they gobbled up my periodic offerings. But it was time to actually cut down these weeds because they were starting to go to seed, and as robust (and seemingly nutritious) as they were, I had other plans for these locations in the Watson Wick.

So I cut them down and threw them into the pond. The polliwogs did start nibbling on the leaves. And the plants that I threw in fresh stayed green! And algae eventually grew on them too. So the polliwogs were very happy. The little greenish-brown ones quickly grew legs, and I started to find little tiny frogs in various places around the house gardens. And there were some big glossy white ones that have been slower to develop. I am doing some research into what these white ones are. And I will do my best to keep at least a little water in the puddle until they too grow legs and crawl out. 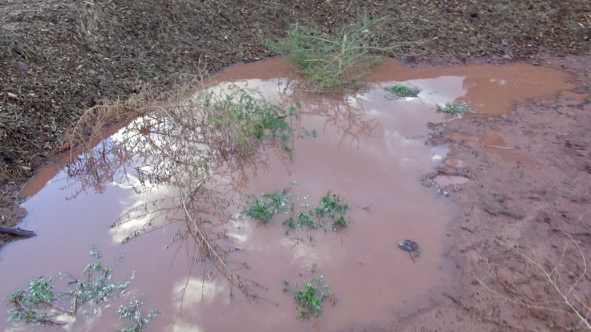 Meanwhile, there was something else stirring in this little vernal pool…

I had just been told by a young man working for me about a strange prehistoric creature that occasionally shows itself in our high desert monsoonal ponds. He thought it emerged about every 50 years or so, and his ancestors (natives of this land) believed it to be a good omen. Apparently these creatures are a crustacean that have survived with little genetic change in 300 million years (120-200 million years before the the dinosaurs). Then he called me over to the pond—he had just seen one! What? Ok, now where did that come from?

This so-called ‘living fossil’ he had just spotted in my pond is called a Triops which means ‘three eyes’, also known as a Tad Pole Shrimp. It looks similar to a small horse-shoe crab. Here it is in the pond (the greenish colored shelled creature with the two big eyes—its third eye is small and not so visible). It also has a tail as long as its body, but you can’t see it here. 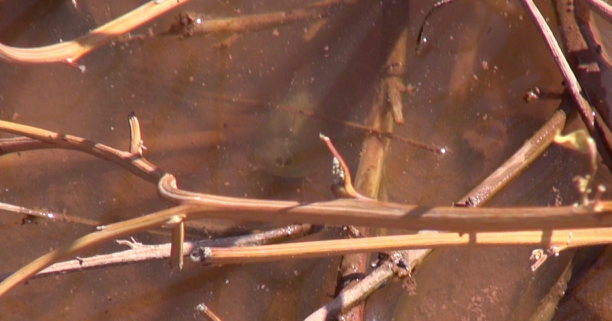 So how does it end up in my pond?

Here is what Wikipedia has to say:

Triops eggs enter a state of extended diapause when dry, and will tolerate temperatures of 208 °F (98°C) for 16 hours[!] The diapause also prevents the eggs from hatching too soon after rain; the pool must fill with enough water for the dormancy to be broken… they may remain in a state of diapause for up to 20 years [some claim even longer].

Apparently the eggs can blow around in the wind during these many years, and can even survive passing through the gut of a bird or animal that may have eaten the mature triops.

Our Creator sure provides many options for life to proliferate. Awesome.

About a month later, I was observing the polliwogs and triops, since I could see them more easily now in the smaller (now 1 square meter) and somewhat clearer pond, and I couldn’t believe my eyes, but I swear I saw fish! What? In this little mud puddle?

Here is how small the pond (puddle) had become by this time, about a month after the rainstorm. This is the same shot as the second picture in this post.

There was indeed a school of little 1 inch long little ‘fish’—some white with orange tails, some all orange—swimming amongst the remaining tadpoles. This was crazy!

At first I thought they were baby triops, but it turns out they are Arizona fairy shrimp—another very ancient and adaptable creature. God was really working hard to encourage life in this challenging desert environment.

According to an article I read, Arizona has 13 different species and the most colorful of all the world’s fairy shrimp. They live for about 8 weeks, and, like the triops, lay eggs that can withstand extreme dry and harsh environments because they too are protected by these amazing ‘resting eggs’ or cysts in diapause. And when enough rain comes, they too hatch into these ephemeral pools.

All this activity and life going on in this short-lived pool of water. Even today, with only a mud puddle left, I saw the triops and some last remaining polliwogs–the white ones. What a fun and interesting experience this has been. I am still going through my inner challenges, but I am discovering lots of fascinating things going on around me. God is good. And very, very clever.