Murphy’s Law: What can go wrong will go wrong.

That second part is me using poetic license with a fundamental Truth that all of God’s Laws are designed to teach us about love. Yet sometimes God’s loving Laws feel to our mistaken souls like everything is going wrong.

Once I made up my mind to find my new home, my soul space, where I could work on bringing my life and my whole soul into harmony with God’s Way, things flowed wonderfully. God’s Laws seemed to work overtime to support me in this endeavor. And even an amazing flow of money showed up (see Transparency). But now that I am actually getting to work on the many projects here at my new home, God’s Laws are supporting me in some much more difficult ways. The Law of Attraction has been hugely challenging, with event after event of big delays and things going ‘wrong’, mostly due to mistakes being made left and right: my own mistakes, mistakes of those who had the property before me, and mistakes of people I am hiring to help me create my home. I appear to be losing a race to get the house set up (with power, toilet, shower etc) before winter sets in.

I have learned, thanks to Jesus and Mary, that in order to come closer to God, I need to unravel my emotional addictions and my facade, so that the painful emotions I have been avoiding could come up to be felt and released. And I understand that this great unraveling will look very messy and involve lots of difficult emotions, but I didn’t expect them to all come up at once! Or at least, that is how it feels. It seems that nothing has being going well since I found this place (except for the money thing). It seems that many of my tears lately are simply because I feel so overwhelmed with feeling completely opposed in my attempt to create my new home and get it comfortable by winter time.

Here are a few examples of what has been going on:

1. When I first put an offer on the place, there was a geodesic dome that I was planning on living in while work was done on the straw bale hogan house. The front window of the dome had a small tear in the vinyl, so I was making inquiries about replacing it right away. Before I was able to compete the sale (by the end of the escrow period), the winds had torn through the window, and succeeded to shred the whole dome to pieces. 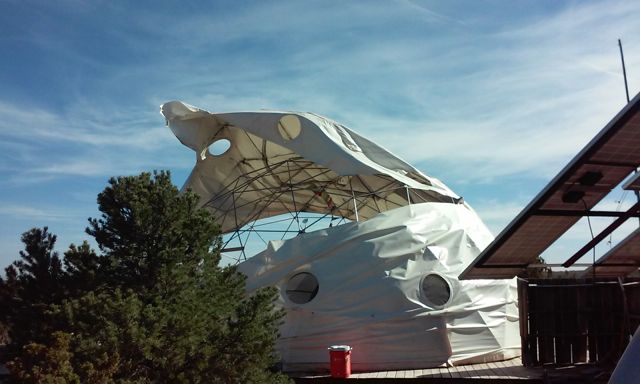 The dome is now just a frame that would cost around ten thousand dollars to re-cover, and vinyl has a poor lifespan, so I decided to use the frame for other purposes (make a greenhouse out of it eventually). This also meant that I would now have to live in the hogan while it is being worked on, which has been very dusty and messy, but preferable to me than a travel trailer. Lately, however, I have been questioning this decision, as I am so tired living in dust and mess.

2. I have always considered myself to be a good gardener. I have done it for 30 years. But my new land and its highly alkaline, clay/sand dirt (can’t even call it soil) seems to suck any nutrients right out of the plants I have tried to grow, and I have failed miserably, even with lots of amendments and manure tea. Every plant I tied to start from seed has died.

3. When I first got here, I bought a generator. It was refurbished by someone who was cleaning a water tank that came with the property, and they were very confident that it was a great deal at $350. After using it only a few times, it blue a piston…shot right out the side of the engine. No warrantee of course.

4. Then there are issues with the hogan house itself. The chicken wire on the straw bales walls was not ‘stitched’ properly, making an unstable base for the mud, and no lime (used to make natural finishes more rain resistant) was used on the exterior walls, so mud washes off where the rain hits it. (And a lime coating can’t be added over an ordinary mud finish, or it will peel off.)

5. And the sand stone slab floors in the house were never leveled, so there is a 2 1/2 inch difference between the doorways and the middle of the room, which means I have to go through each stone and level it. Extremely tedious. Thank goodness I actually like working with stone.

6. The wall finish of my hogan house is basically cob, which is a mix of sand, clay and bits of straw, and when I bought the place much of it was in great disrepair. To protect the straw bale structure, and keep critters out, this was a priority to remedy. It requires a certain ratio of clay to sand in order to be sticky enough to hold together (not enough clay) yet not crack (too much clay). I had a very frustrating time with numerous batches of cracking mud before I finally came up with the right mix using the unique sand and clay from my land.

7. Due to the many breaches in the exterior walls, there were chipmunks and dozens of mice and crickets living in the house when I first moved in who seemed to hold loud parties all night long. I went through months of catching mice one by one in a Have-a-Heart trap that I rigged so the Houdini mice couldn’t escape (they can get through a 1/4 inch by 1/2 inch opening!), and the crickets I got good at catching with a large plastic cup.

8. Another major priority on this place was to get a new roof because the old one had blown off in sections, and the valleys of the roof were done backwards, capturing water and running it under the lower roofing. So as soon as I had possession of the place, before the money came in, I ear tagged what resources I had to get that rolling. I had a company all set up to do it, and at the last minute (days before they were meant to get started) they canceled the job. Now that might not seem like a big deal, but here in Arizona, there is a limited window of opportunity to do roofs at this time of year so everyone is clambering to be scheduled. Timing has to be after the hurricane like winds we get every spring, and before the monsoon season, which typically starts July 1st. This cancellation meant that I was now scheduled into the monsoon season. I was lucky though as monsoons started late this year, but that didn’t help my stress level. One of the few successes in this saga of trying to get things done is that I now have a new roof, gutters and tanks!

9. But the challenges continue… Two weeks ago, a man I hired to install a solar system for me accidentally dropped the power supply wires for the well pump down into the well! It wasn’t really his fault as the installer did not secure the wires at all. He was unable to fish them out, so I have had to contact a well driller to pull out the wires by pulling out the well pump, which will cost me many dollars. Meanwhile, the solar system, which was supposed to take only a few weeks to install, is now on its second month.

This last one about the dropped wires really got me. Its kind of like, OK, God, there must be an emotion (or a hundred) that is bringing all this difficulty to me, which I am not getting to, regardless of regular feeling/prayer sessions. What am I missing? I was so looking forward to finally having power, pressurized water, a hot shower, and a flush toilet, which I have been without this whole time. I am really tired of camping. I am really tired of everything going wrong. I even entertained the thought of packing it all in, and finding a finished home (since I can afford it now) on less acreage where I could avoid my fears and addictions and spend time doing easier, more enjoyable things than confronting every addiction I have. But a more comfortable life will not bring me closer to God, Truth, or knowing who I really am (which includes my soulmate). So on I trudge, apparently facing every addiction known to man.

One of the immediate emotions that comes up for me when something comes up due to a mistake or goes wrong is anger. I am getting more sensitive to when it arises, so I have been ‘working’ on it regularly, but all that bashing my tree trunk post in my house with my rubber hose and screams of frustration into my pillow may, at best, only made a dent in the issue. But with all that has been going on lately, and the fact that I have been feeling so many emotions about things going ‘wrong’, something did happen that feels really helpful. I was in one of my attempts-to-pray-and-feel sessions, and I did receive an insight. It turns out that I have some false beliefs that go back to childhood about anger and having unloving expectations and demands of people (including myself) that have been keeping the anger solidly in place all this time. I could bash and scream forever, and unless I unravel these false beliefs, I will remain enmeshed with anger. This is really good news. And I will share more about these discoveries in my next post.

Until then, May you be in a good flow with God and Her powerful loving Laws,